Information on romance scams and scammers.

Claims that his name is Gary Steve and he is a marine in US army and in Nigeria on a mission, coming home at Christmas. Claims to be divorced from his wife for 5 years with no kids

I am smart, strong, sensible, insightful and willing to share my most intimate feelings. I am proud of my physical body. I have strong arms to hold you near me and give you special back rubs. I do enjoy playing golf, biking, hiking, swimming, football, soccer and tennis. I love to read, travel and discover new ideas and places. Sometimes it is just as nice to curl up on the couch in front of the fire with good book or with that special someone! I have many diverse interests and passions art, music, philosophy and the human condition. This time around the next woman I would love in my life would be open-minded. There are many rich women in the state dying to spend the rest of thier lifes with me but i turn them down because i'm a man of choice and desire' i don't want any woman to break my heart. I believe in looking into the window of our souls and seeing the beauty we have. I guess you could say I am a man that is in touch with his feelings. I am supportive and caring and have a loyal and tolerant character, very humble, honest, understanding and truthful. I'm very passionate, physical person that would want the same in a mate, deeply romantic, optimistic. Again, thank you so much for your time you have spent with me and i am so happy to have you as my friend. 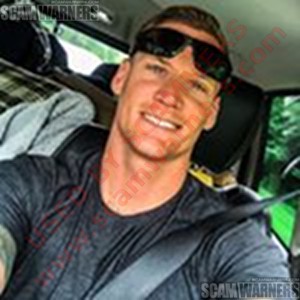 Please do not tell scammers that they are listed here - it will take them seconds to change their fake details and their new details will not be listed for any future victims to find.

Can you please post the name/email address without editing them - we want it to be searchable by other victims and it isn't clear from what you posted what the actual email address and name being used now are.
Please do not tell scammers that they are listed here - it will take them seconds to change their fake details and their new details will not be listed for any future victims to find.

Never gave a last name. Claimed to be based in California...going back to Middle East in 2 weeks. Also likely back home for Christmas.
EOD symbol seen on an internet twitter post...bomb midst lightning bolts next to burned ir scorched U.S. flag style banner.
Name with that post... Edwin O [email protected] Smith Krue1.
Who knows.?

This pic showed up on at least 6 or 8 web sites...mostly dealing with romance or military associations.
Can't seem to upload the military pic but likely it's taken from someone's album/site.
That's all I know of him.
Username
1NTexas
Rank
Registered Member
Posts
5
Joined
Fri Oct 19, 2018 12:42 am

#375163 by 1NTexas Mon Oct 22, 2018 12:06 pm
Got a mail from him this morning.
Saying he'd SEND me his travel belongings, picture frames, and a box containing $3mill cash jn traveling expenses.
All via Red Cross courier.
What...Red Cross has courier services.?
Just needs address to send his stuff.

I do not personally believe he is the scammer, but some one useing the same name & skilled webuse wise to manipulate the given mail address to their own location.
Exactly where...I don't know.
The pic is taken from the same owner's name...along with several others as well, used as bait in various social romance & personal meeting sites.
The person shown in the above pic may still well be on active duty...and likely not know his pics are being used erroneously as their postings is on an open & public web site that can be viewed without logging onto the site.
A BIGG error in site & personal security combined.
Seems the site allows twitter posts to be used & viewed openly...pics too.
So just about anyone skilled and deceivious can opt for any pic of their choice.

For now trying to trace back the mail address if the one used by the scammer is at a loss to me.
Maybe some one more skilled in the web use can have better luck.
The scammer as of yet has not asked for money but [email protected] asked for addresses & phone numbers.
None if which he has...as far as i know.
Username
1NTexas
Rank
Registered Member
Posts
5
Joined
Fri Oct 19, 2018 12:42 am

all pics are stolen from this instagram profile
instagram.com/eodchipiv/ 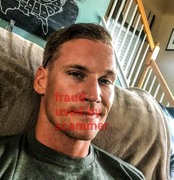 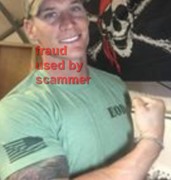 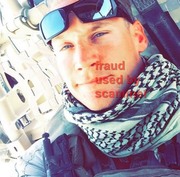 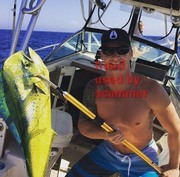 this seems to be the scammer behind the entire story
Eod Chipiv (Boss)
Studied at University of Ghana
Lives in Accra, Ghana
From Benin, Nigeria

#377892 by 1NTexas Thu Dec 06, 2018 1:10 am
Seems as though several picture sites carrying this chaps posts gave been deleted.
Figured the pics were taken from one or others, used in frauds or various social medea scams.
Username
1NTexas
Rank
Registered Member
Posts
5
Joined
Fri Oct 19, 2018 12:42 am

Re: Eodchipiv Gregory on FB

In my case he was Andrew G. Blood. He was a souldier on Egipt, just before his retirement. He grew in a orphanage, widower, with son Barry, 7 years old. Originally he lived Atlanta but he wanted to come here to Poland. His son called me mommy, he was in school in Washington. As he wanted money from me he had do mamy problemy: his son broke his ribs, Andrew need to get money through a specjal delivery by Red Cross, in journey to Poland he had an accident and IT was needed to psy for his treatment, Barry was holden in hotel room because I had to psy for his room while his father was in hospital unconcious.... Mamy stories, it is a shame that I didn't look at this site much earlier.
Username
Fool230
Rank
Registered Member
Posts
8
Joined
Mon Oct 14, 2019 7:22 am
Reply

Users browsing this forum: No registered users and 21 guests