#217515 by Rembrandt Wed Sep 03, 2014 1:44 am
I was going through a lonely period in my life, and was looking for a life partner after experiencing a horrendous dating/relationship life in my home country. One of the dating sites I joined was "Elena's Models", a website specialising in Eastern European women. I started corresponding with a girl named "Svetlana Osipova" from a small town in Russia called Saratov. We wrote to watch other weekly, and after a few months of correspondence, I decided to fly over to Russia and meet up with her, what unfolded next was a nightmare.

I really wish I did a search on this girl, as reports are written about her all over the internet.

Her name is Svetlana Osipova, and she is from Russia, in a city called Saratov.

I met this girl from an online dating website, and flew over to Saratov to meet up with her from San Francisco.

I initially was about to book a hotel for myself online, but she insisted that she could get a cheaper place for me in Saratov as she had connections. I intended to stay for 8 days. She said all up the apartment she got for me would cost 500 USDs, when I got there she asked for what was the equivalent of about 930 USDs, telling me the price went up due to the unpredictable economy (Russia had troops in Crimea at the time). The first mistake I made.

My better judgement told me something was not right, straight away though Svetlana dressed erotically and was making all these sexual advancements towards me that made me drop my guard. She ended up showing me around the city whilst coming back to my apartment every night and having absolutely wild sex.

Then on the 7th night, I came back to my apartment with her, ordered some food, answered the door, only to be confronted with 2 angry thugs. Svetlana started screaming at me hysterically, saying that I raped her over the last several days. For some stupid reason I told her I had 8500 dollars in cash on me, which she demanded I give her. After that, she took my key card, got my pin number, and went outside as I was left in the apartment with the 2 thugs. Luckily I had a withdrawl limit of 1500, which she ended up taking out the equivalent of in Rubles.

She left that night saying that if I informed the police of what happened, she’d get the thugs to give her bruises on her body, and counter claim that I raped her.

I was in a dodgy, lawless country, scared about the notion of being locked up in some dirty, rotten Russian jail for the next 10 or so years, and decided to just cut my losses and fly back to the states the next day.

Please guys be careful of this girl. She will write all these letters to you, saying she’s looking for a husband and wants nothing more than to be a house wife and have children. That’s a bunch of lies, she is setting you up to be emotionally invested in her, so she can extort money off you. Guys, be very wary of her! She takes scamming to a whole new level. Don’t make the same mistake me and some other guy made.

I don't know for sure if these details are still current. I know for sure she has changed her email address, and I has scammed a couple of other men via Western Union and airfare scams, although for much lesser amounts.

These are her photos: 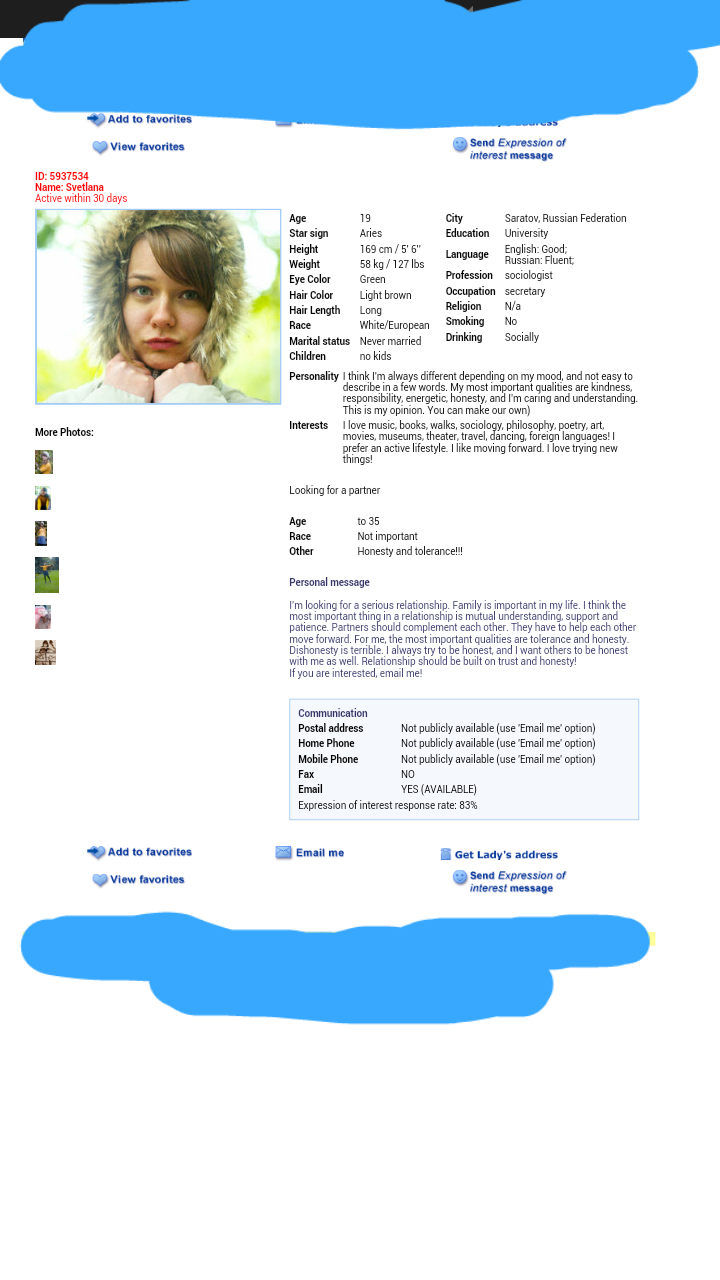 #217717 by Bubbles Thu Sep 04, 2014 10:28 pm
Welcome to ScamWarners Rembrandt, I am sorry for your experience. As you have realized now, these scammers are proficient at what they do. The girl you met is most likely a victim too. I am glad that you survived the ordeal, some have not been so lucky.
Bubbles, former Scamwarners moderator.

#217828 by Rembrandt Sat Sep 06, 2014 12:32 am
Thanks Bubbles! Yeah, I've subsequently learnt that a lot of these girls work for criminals and are sometime coerced into doing this.

I've also read stories about men who've been kidnapped and killed, I actually hate to think what would have happened if I didn't have that much money on me.
Username
Rembrandt
Rank
Registered Member
Posts
2
Joined
Wed Sep 03, 2014 12:38 am
Reply
Return to Romance scams

Users browsing this forum: No registered users and 49 guests