Scams re-targeting those who have already been victimized
Reply

I am Robert Zoellick the last president of the world bank.I have been succeeded by Dr Kim and he has retained me as a consultant of the world bank.I am in Ghana/ London United Kingdom investigating why your funds in Africa/other continents were not released to you. I have discovered that there was lots of corruption and wrong dealings.I will release your funds in the total of $27,200,000(MILLION USD) to you immediately. Please find attached a copy of my passport and identification card.

Please be informed that you have been dealing with bogus characters and as such I will advice that you wait that I transfer funds out to you and start a proper investigations on all your funds in the sub region.With the help of the CIA we are able to establish the facts.Be informed that as an American,I will not deal with any of your bogus characters .You are to carry out my instructions and be rest assured your funds will get to you without any problems.Heed my advice and you will be glad you did.

Forward your bank details where you want the funds to be transferred into to email: [email protected]

Please contact me immediately for your funds to get to you and forward your telephone numbers.Furthermore I will explain to you the duties of the world bank.

The World Bank was formally established on December 27, 1945, following the ratification of the Bretton Woods agreement. The concept was originally conceived in July 1944 at the United Nations Monetary and Financial Conference. Two years later, the Bank issued its first, and largest, loan: $250 million to France for post-war reconstruction; an issue which has remained a primary focus, alongside reconstruction after natural disasters, humanitarian emergencies and post-conflict rehabilitation needs affecting developing and transition economies

The World Bank is one of the three Bretton Wood Institutions which were created in 1944 to rebuild the destroyed Europe after World War II. Later, after the economic revival of Europe, the World Bank’s activities became focused on developing countries. By financing infrastructure projects, poverty should be reduced. Today the focus is on the achievement of the Millennium Development Goals (MDGs), goals calling for the elimination of poverty and the implementation of sustainable development. The constituent parts of the Bank, the IBRD and the IDA, achieve their aims through the provision of low or no interest loans and grants to countries with little or no access to international credit markets. The Bank is a market based non-profit organization, using its high credit rating to make up for the low interest rate of loans.

The Bank’s mission is to aid developing countries and their inhabitants achieve the MDGs, through the alleviation of poverty, by developing an environment for investment, jobs and sustainable growth, thus promoting economical growth and through investment in and empowerment of the poor to enable them to participate in development. The World Bank see's the six key factors necessary for economic growth and the creation of a business environment as:

Infrastructure creation – implementation of legal and judicial systems for the encouragement of business, the protection of individual and property rights and the honoring of contracts.

Development of Financial Systems – the establishment of strong systems capable of supporting endeavors from micro credit to the financing of larger corporate ventures.

Research, Consultancy & Training - World Bank provide platform for research on development issues, consultancy and conduct training programs (web based, on line, video/tele conferencing and class room based) open for those who are interested from academia, students, government & NGO officers etc.

The Bank obtains funding for its operations primarily through the IBRD’s sale of AAA-rated bonds in the world’s financial markets. Although this does generate some profit, the majority of the IBRD’s income is generated from lending its own capital. The IDA obtains the majority of its funds from forty donor countries who replenish the bank’s funds every three years, and from loan repayments, which then become available for re-lending.

The Bank offers two basic types of loans; investment loans and development policy loans. The former are made for the support of economic and social development projects, whereas the latter provide quick disbursing finance to support countries’ policy and institutional reforms. Although the IBRD provides loans with a low interest rate (between 0.5 – 1% for a standard Bank loan), the IDA’s loans are interest free. The project proposals of borrowers are evaluated for their economical, financial, social and environmental aspects to ensure that they are viable before any amount of money is distributed.

The Bank also distributes grants for the facilitation of development projects through the encouragement of innovation, cooperation between organizations and the participation of local stakeholders in projects. IDA grants are predominantly used for:

The Bank not only provides financial support to its member states, but also analytical and advisory services to facilitate the implementation of the lasting economic and social improvements that are needed in many under-developed countries, as well as educating members with the knowledge necessary to resolve their development problems while promoting economic growth.
Please ensure to finalize all arrangements for you funds to be transferred immediately. 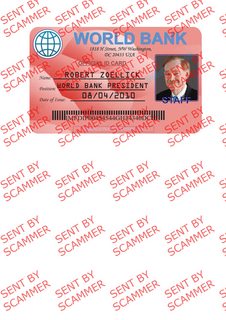 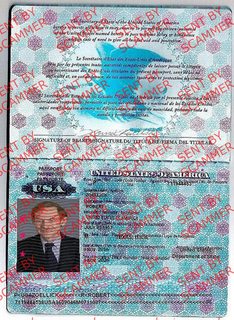 Important: Any email messages I have posted here are scams. Don't reply to these messages or click on any links. Please do not tell these criminals that their messages are posted here.
Username
FishyMails
Rank
Registered Member
Posts
3689
Joined
Wed Sep 04, 2019 10:34 am
Advertisement

I have received your account details and instruction in your email to make immediate transfer of $27,200,000 to your account with information below.

Note that before transfer will be made, you are to make a tax payment of $2,720 to the national treasury of Ghana. Unfortunately, the tax fee cannot be deducted from the funds.

You are to send the tax fee through western union or money gram directly to the receiving secretary.

As soon as you have it sent, you are to send the MTCN/REFRENCE NUMBERS and EXACT AMOUNT SENT.

Your funds will hit your account precisely 3 hours after transfer is made and a confirmation will be sent to you. All documentations to back your funds are all intact and the world bank will provide all certificates on your behalf.

Please be rest assured that there will not be any further payment required of you but the immediate transfer of funds. You are advice to make the payment immediately

I will be leaving for London shortly and it will be in your best interest that I conclude with your transfer. Kindly reply me once you get this email to inform me what you want to do and do not just neglect this email please.

BUT IF YOU WANT TO RECEIVE THE PAYMENTS BY CHECK, IT WILL BE DONE ALSO AFTER THIS PAYMENT OF THE MANDATORY TAX FEES.

Important: Any email messages I have posted here are scams. Don't reply to these messages or click on any links. Please do not tell these criminals that their messages are posted here.
Username
FishyMails
Rank
Registered Member
Posts
3689
Joined
Wed Sep 04, 2019 10:34 am
Reply
Return to Recovery scams

Users browsing this forum: No registered users and 7 guests