HAVE QUESTIONS? - ASK FOR HELP HERE - Have you received an email you aren't sure about? Are you currently corresponding with someone you suspect is a scammer? Do you have questions about a scam? Post here for answers and advice.
Reply

#392682 by pennypincher Thu Aug 01, 2019 2:54 pm
I have a friend in his 70s who is caught up in many scams and will not believe me when I try to explain that they are not real. He is in serious financial trouble and is always broke. His bank closed his account due to suspicious activity, western union won’t wire money for him anymore, he recently picked up multiple cell phones from several stores to ship to someone else, and had his “girlfriend” not show up at the airport after he rented a car to pick her up. One time he expected a credit card with a $20k limit on it and he was going to buy a new car. He asked me to drive him an hour away to pick it up, but of course that fell through. He must be on an easy victim list. I tell you all this because it explains why I did what I did next. This latest scam is confusing and I need to know what to tell him.

He used to live near me, moved 6 months ago. I was chatting with the new residents recently and they had accidently signed for a next day air package from UPS that had his name on it. They gave it to me to give to him as we have done with his previous mail.

First thing I noticed is that his name was misspelled and middle initial is wrong. The return address is also a mystery:

The tracking number showed it was delivered over a month ago (maybe refused?) and then updated on the date the neighbor signed for it, so their name is on it.

I didn’t want him to be involved in another scam, so I opened the package expecting a check from a foreign bank. I was going to destroy it and not say a word about it.

Instead there were 2 letters, apparently from UPS, and another package.

The UPS fraud phone number is another Illinois number. UPS does not have a number to report fraud I found out. The return address on one letter is the same empty lot. Obvious fakes I would say.

The package inside had an identical shipping label as the box. Inside that was an envelope containing $400 cash. I really doubt this is his money being sent back to him by UPS. Can you explain this? Should I warn the neighbor who signed for it? And what should I do with it, reseal everything and give it to the mule and let him learn his lesson? Or give it to the sheriff? Who, btw, was just at the senior center warning everyone of scams.
Username
pennypincher
Rank
Registered Member
Posts
2
Joined
Wed Jul 31, 2019 11:19 pm
Advertisement

Re: Is this money laundering? 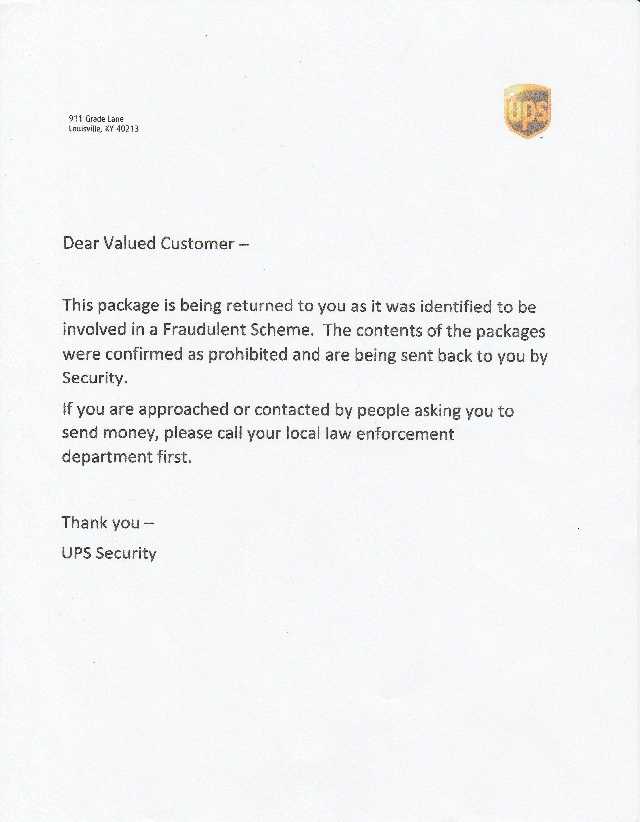 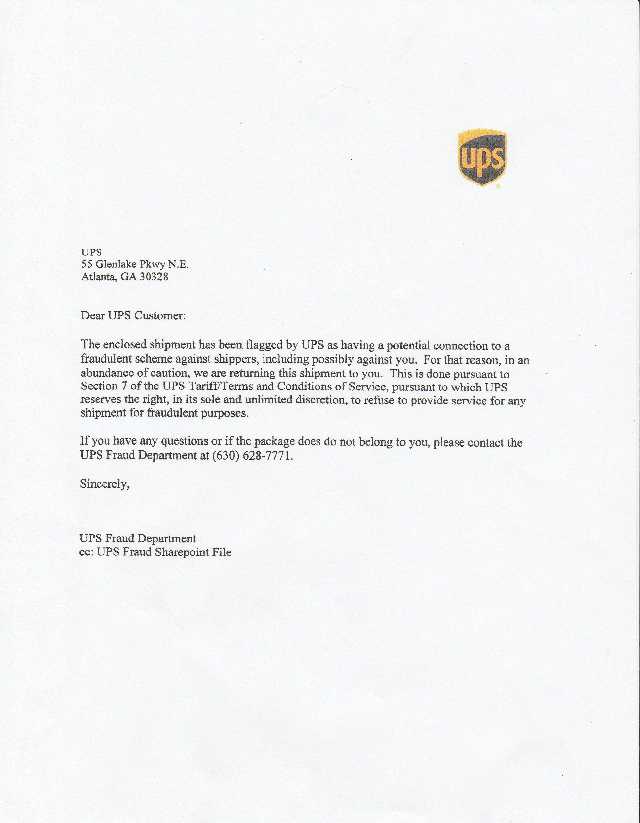 Username
pennypincher
Rank
Registered Member
Posts
2
Joined
Wed Jul 31, 2019 11:19 pm
Reply
Return to Help! Is this a scam? What should I do? - Victim Support

Users browsing this forum: No registered users and 2 guests